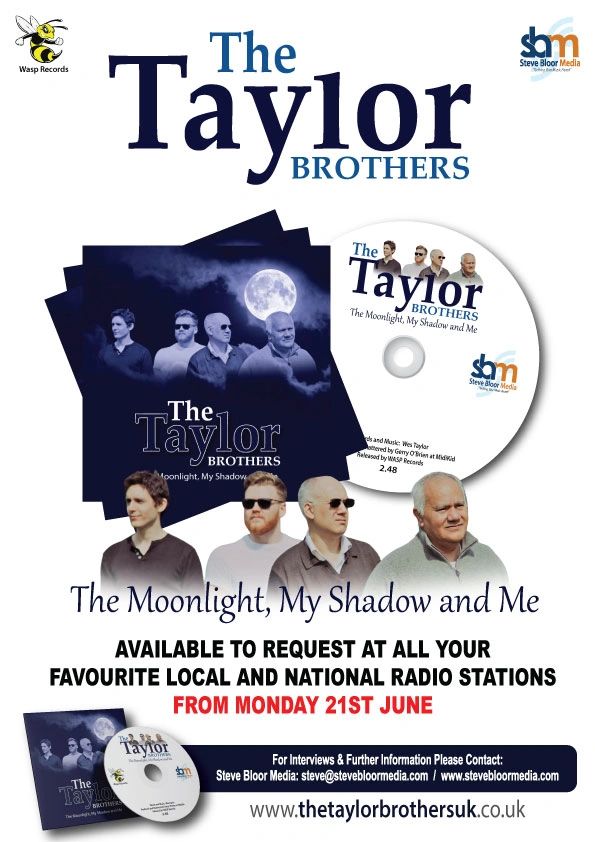 “The band first got together when Jeff, Rob, Wes and Guy Taylor got together about 20yrs ago.  However, Rob moved to Australia and Jeff then left to pursue other music interest.

Conor then stepped in as lead Guitarist when he grew older, being to young to play when the original line up started.

Jon Kerr was a close friend of the lads and a singer songwriter in his own right, and he was asked to make up a 4 piece combo and share lead vocals with Guy.

After a year, close friend Peter Swordy, who was playing drums with another band was on his own after that band split up.  He was immediately asked to join The Taylor Brothers, being a close friend of Wes Taylor.  So finally the band took the shape seen today.

With most of the songs being written by Wes Taylor emphasis was placed on 4 part harmony, and this can be heard throughout their records.

produced by Peter Ware and Jon Starling, the band produced great songs which uses a variety of instruments from the Harps to wind chimes.

Gerry O’Brien, suggested band write and record a waltz with an Irish twist, so Wes Taylor wrote “the Moonlight My Shadow and Me”  He said
“As I wrote the song, I could hear Jon Kerr’s lead, and he snag it exactly as the song needed.  We are lucky to have Jon on lead, he sings a song like it is a warm coat in winter.  A wonderful voice.

I wanted whistling at the end of the song which would fade out, we had no idea Jon was a fantastic whistler, as I originally asked singer songwriter Seamus Fitzsimons to do that part and he was all set, but when the producer heard his whistle, straight away we knew it would work.

The song was passed to Gerry O’Brien to produce and mix, and the end product worked very well.

Enjoy the songs of the Taylor Brothers and feel free to follow them on Face Book and all social media outlets”.

Beyond The Far Horizon - The Taylor Brothers